I had just begun photographing along US Route 89 when an article appeared in the New York Times Magazine that changed my thinking about the project. It was entitled A Slow-Road Movement? and was written by Robert Sullivan on the occasion of the 50th anniversary of the Interstate highway system. He detailed some of the negative consequences of the system and then cited new thinking about what purpose roads can serve besides moving cars from one place to another as fast as possible. He concluded the essay with this thought:

“Now we have to decide whether our roads will continue to strangle us, to drive us crazy, to pollute and poison our air and water or maybe slow us down in a good way and give us a chance to enjoy everything we still have left and have worked so hard to build.” 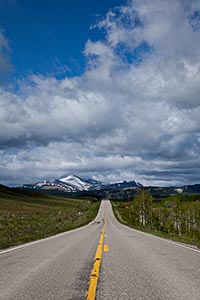 It was at that moment that the philosophical underpinning for my work on Highway 89 became apparent. Until then I had thought of it as a landscape photography project. I would go from one national park to the next, take my photographs and publish a coffee table book. End of story and on to the next adventure. The Sullivan essay made me realized that the project also needed to be about the road trip itself and about the joys of slowing down on a two-lane highway through some of the most beautiful country in America.

The notion of driving for pleasure is as old the automobile itself. The grand parkways that were constructed in the late 19th and early 20th century were explicitly designed for scenic beauty. The mythology surrounding the family driving vacations of the 1940s and 50s has much to do with the adventure of discovery that slower roads and cars provided. The Interstates, which were originally conceived of as military roads, intentionally bypassed the small towns and cities so that cargo could move as fast as possible. For me the project became about encouraging a return to an older way of thinking in which the journey is as rewarding as the destinations.

Out of that thinking came an email newsletter, Along 89. Then came the website with its Road Trip Guides. Keeping up with online publishing, I started the US Route 89 blog to document the road trip Barbara and I made in 2010. It has now become a sort of magazine full of articles to excite travelers about the adventure of taking the slow road. All of this is aimed at encouraging travel on 89 as well as being a place to display my photographs. I haven’t forgotten about that coffee table book and someday it will become a reality. For now I’m enjoying sharing my work with you through all this “new media.” 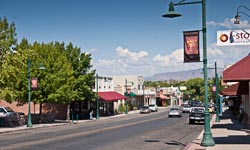 Historic US 89A, Cottonwood, Arizona

Finally, out of all this philosophizing came the idea that there should be a way for people who feel the way I do to be part of it. Thus, the US Route 89 Appreciation Society. I thought long and hard about the name. Should it be a club, organization, association or alliance. All those seemed to modern or sterile for what I was feeling. I wanted to suggest something a little more old-fashioned and quirky. To me, Appreciation Society suggests a group of people who have come together because of their love for one of America’s most beautiful slow roads.

I want to say thank you to the individuals, businesses and civic organizations that have become members of the Society. Join us and become part of the slow road movement.