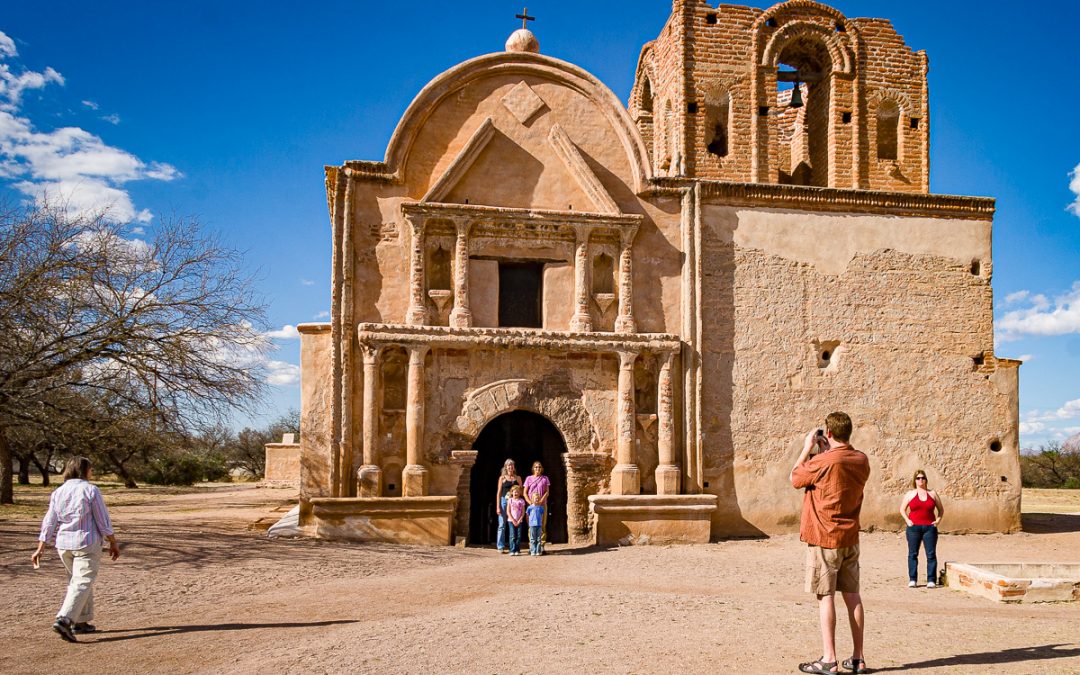 Add the Santa Cruz Valley National Heritage Area in southern Arizona to your list of must-see places along Historic US Route 89. The heritage area brings together the cultural, historical, and natural resources of the Santa Cruz River watershed to provide visitors with a comprehensive understanding of the region. 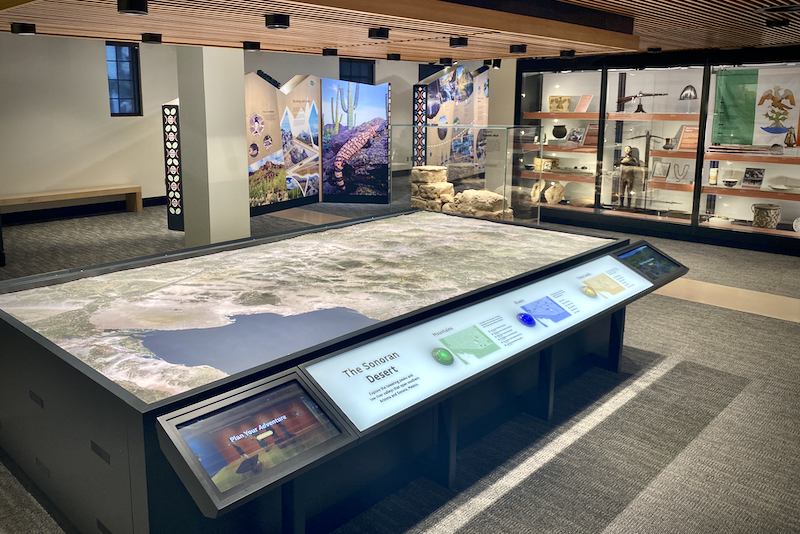 Start your journey at the Southern Arizona Heritage and Visitor Center in the historic Pima County courthouse in Tucson. The visitor center offers a comprehensive introduction to all there is to do in Tucson and south along the Santa Cruz River and Historic US Route 89. Seven storytelling portals will introduce you to the key elements to experience on your journey: Innovation, History, Arts & Culture, Food, Recreation, Water, and Nature. A large tabletop topographic relief map provides an overview of the region alongside a video presentation. Finally, the friendly staff will answer your questions, and the well-stocked gift shop offers books and souvenirs. The center is open from 10 am to 5 pm daily. 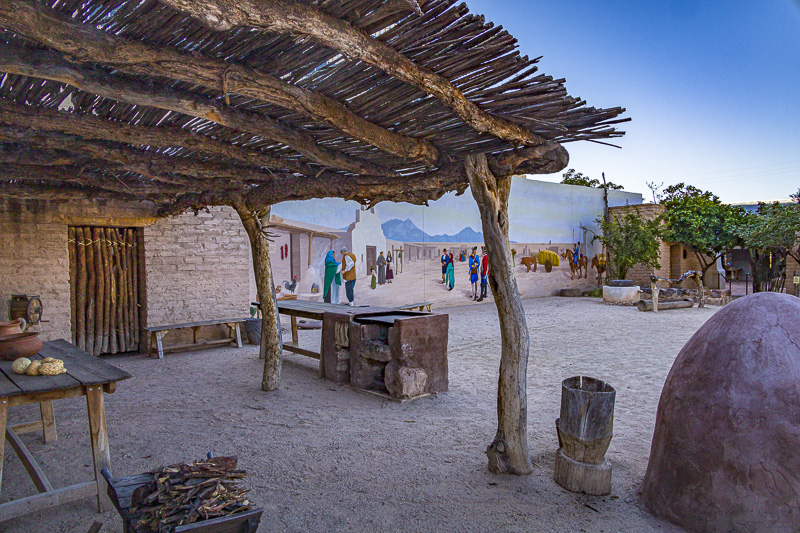 A couple of blocks from the Visitor Center, you will find the Presidio San Augustín del Tucson Museum, a re-creation of the Spanish presidio built in 1775. Then, it was the northernmost outpost of the Spanish empire in America. In the museum, you will learn about life in early Tucson on docent lead tours, including Native American, Presidio residents, and Territorial Period settlers. The museum also offers walking tours and regional cultural tours. 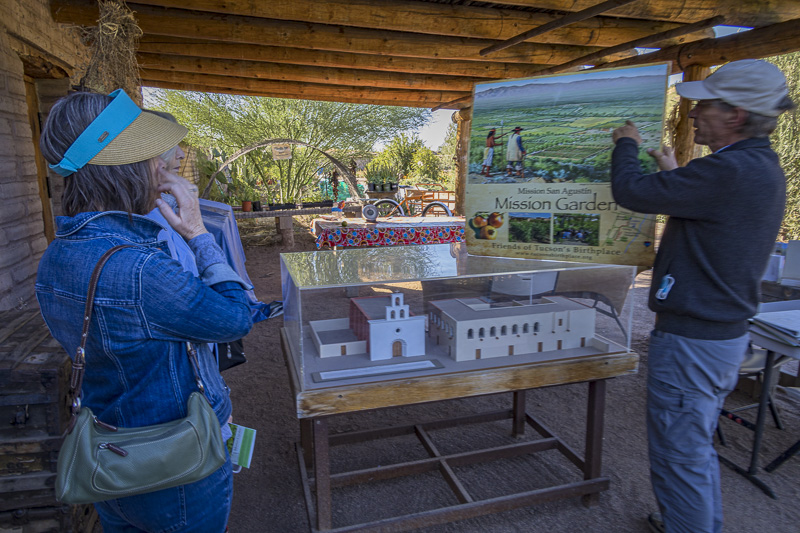 The Mission Garden is located on the west side of the Santa Cruz River near the original San Augustín Mission site. It is a living agricultural museum of Sonoran Desert-adapted heritage fruit trees, traditional local heirloom crops, and edible native plants. Situated at the foot of Sentinel Peak, it is at the site of the Native American village of S-cuk Son (pronounced Chuk Shon), a place sacred to the Tohono O’odham. 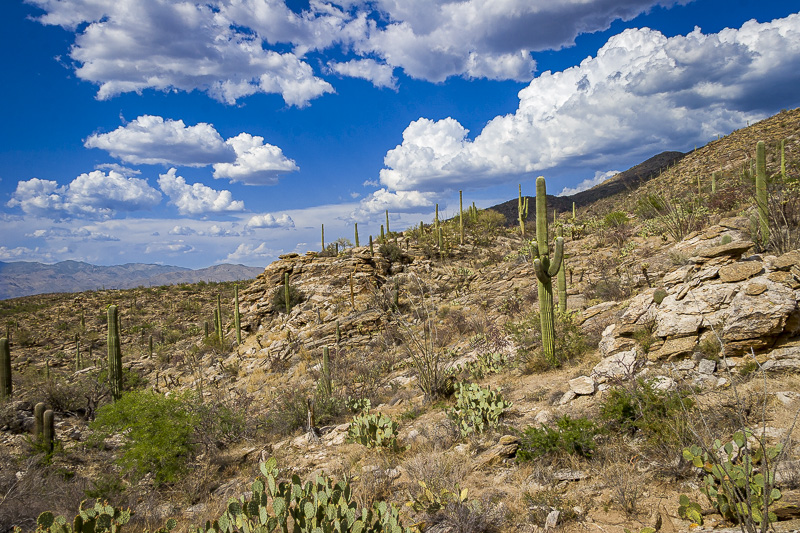 Tucson is the home to North America’s largest cacti, the majestic saguaro. The universal symbol of the west is protected in the two districts of Saguaro National Park on the east and west side of the city. You can explore the Sonoran Desert along loop drives and take short hikes along nature trails and scenic viewpoints. Visitor information and retail from Western National Parks Association are available at the visitor centers in both the Rincon Mountain District (east) and Tucson Mountain District (west). 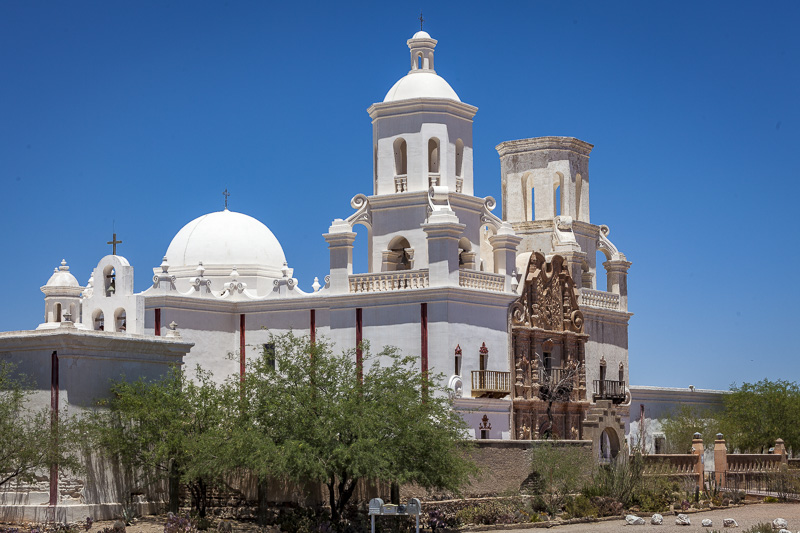 A National Historic Landmark, San Xavier Mission was founded as a Catholic mission by Father Eusebio Kino in 1692. Construction of the current church began in 1783 and was completed in 1797. The oldest intact European structure in Arizona, the church’s interior is filled with marvelous original statuary and mural paintings. It is where you can truly step back in time and enter an authentic 18th Century space. The mission is located in the San Xavier District of the Tohono O’odham Nation’s reservation. 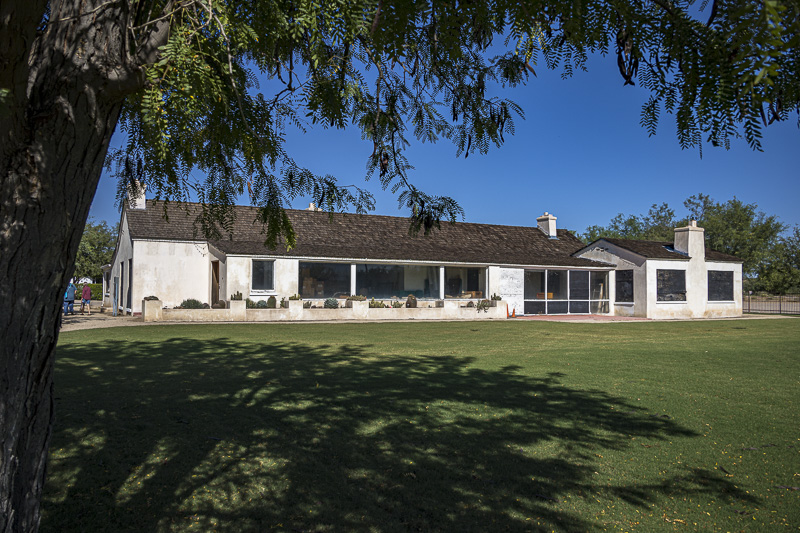 In 1812, Spain created the 17,000-acre San Ignacio de la Canoa Land Grant for cattle and horse ranching to Tomas and Ignacio Ortiz. After the Civil War, the Ortiz brother sold the land to American ranchers who continued to raise cattle and horses. Hacienda de la Canoa is the name given in the 1920s to the 30-acre ranch headquarters. The Raúl M. Grijalva Canoa Ranch Conservation Park encompasses 4,800 acres of the original San Ignacio de la Canoa Grant and is open to the public. The Canoa Ranch offers tours and environmental education programs such as bird walks and stargazing. 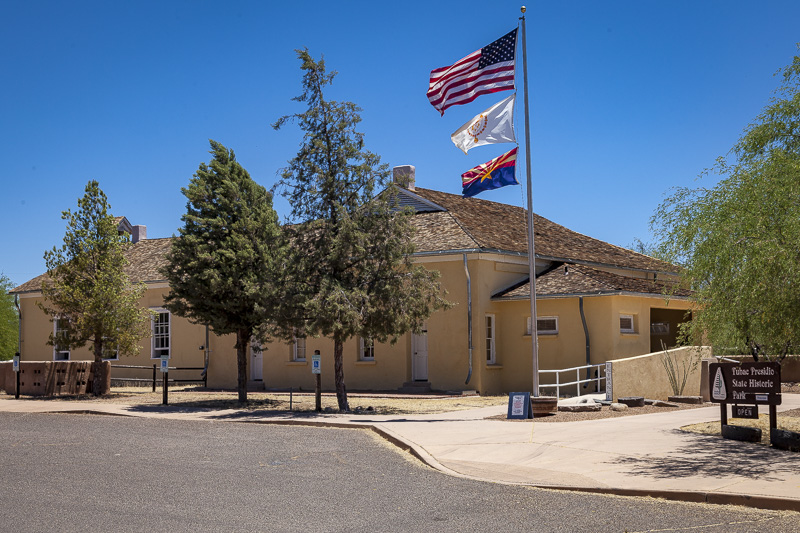 This Arizona State Park is home to the ruins of Arizona’s oldest Spanish military fort, San Ignacio de Tubac. Artifacts on display shed light on how the Native American and Spanish peoples may have lived. Explore a Commandant’s quarters, a Territorial Schoolhouse, and an adobe rowhouse while learning Spanish Colonial history. 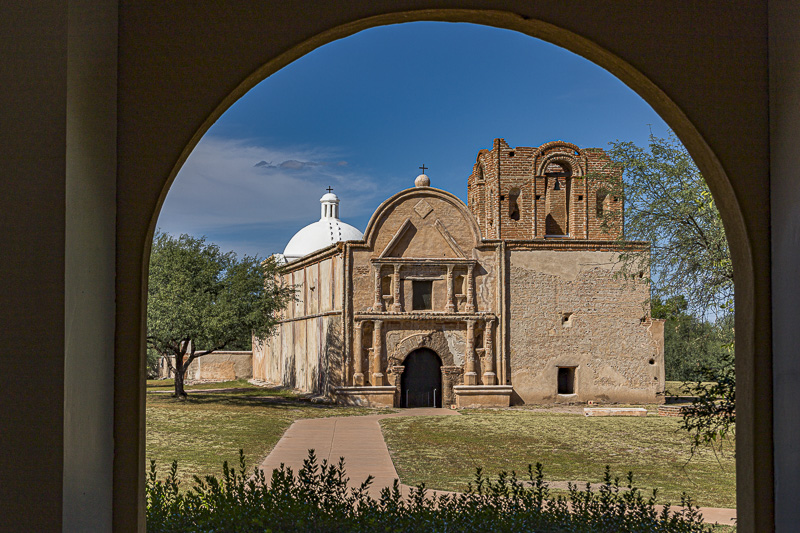 A self-guided walking tour of Tumacácori includes the mission church, San José de Tumacácori, the cemetery, mortuary chapel, and portions of the Convento area. The visitors’ center is housed in a 1937 adobe building with exhibits detailing the history of the mission. In addition, a fiesta is held each year on the first full weekend in December, at which crafts and food from O’odham, Yaqui, Apache, and Mexican cultures are displayed. 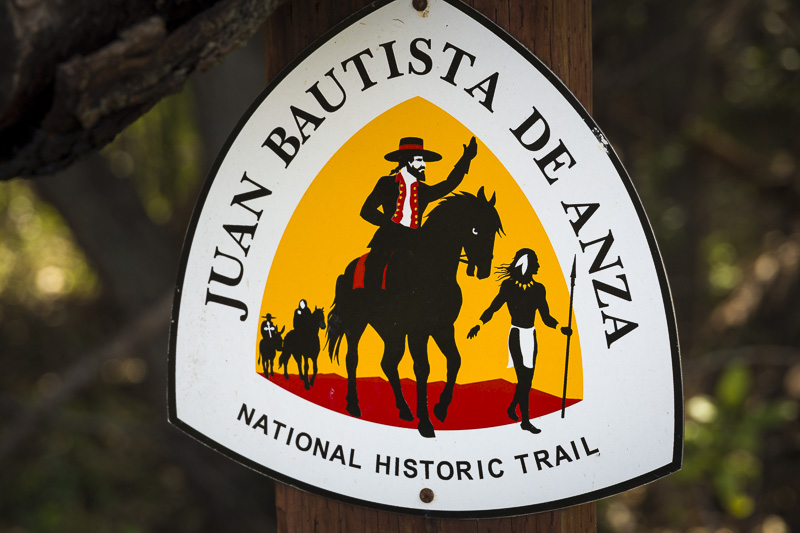 In 1775-76, Juan Bautista de Anza led 240 men, women, and children on an epic journey to establish the first non-Native settlement at San Francisco Bay. Today, the 1,200-mile Juan Bautista de Anza National Historic Trail connects history, culture, and outdoor recreation from Nogales, Arizona, to the San Francisco Bay Area. You can hike a section of the trail between Tumacácori and Tubac along the Santa Cruz river through beautiful riparian habitat containing cottonwoods and mesquite. 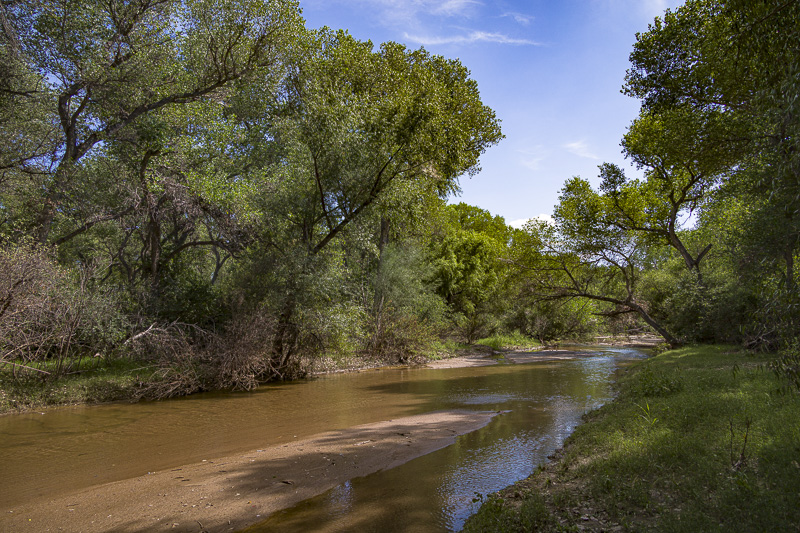 The Santa Cruz River starts in the San Rafael Valley, flows south into Mexico, makes a U-turn, and then flows north past Tumacácori, Tubac, and Green Valley, through the Tohono O’odham Nation and the city of Tucson. Today, many stretches of the river only flow when it rains. To visit a free-flowing section of the Santa Cruz and experience its riparian habitat, follow the Tumacácori National Historical Park signs to the river’s edge.