While Barbara has been working out the design and construction of the book for the Salt Lake City office of Snell & Wilmer, I have been printing the photographs. Many of them I have printed before, so I have worked through the corrections to the digital files that I feel are necessary to bring them back to what I saw when I clicked the shutter.

The art of photography is a continuing set of compromises and adjustments that are necessitated by the materials we use to present the work. A print of a photograph on a piece of paper can only encompass a very limited range of tones from black to white. This range is much less than the range film or a digital camera sensor can capture, which is much less than the actual brightness range of most scenes. When the human eye travels over a scene, the brain continually adjusts so that we see detail in both the light areas and in the shadows.

Most of what I do in preparing a photograph to print is to make adjustments that reveal the detail in both the highlights and the shadows and bring them into the range that the paper and ink can reproduce. There is also an inherent loss of sharpness in the digital process which I carefully restore. That’s about it. I keep my finger off of the saturation slider and other “adjustments” which tend to push landscape photographs toward the surreal. I prefer to make prints with subtle variations in tone and color, rather than dazzle the viewer with unnatural colors and exaggerated tonal ranges.

Several of the photographs for the book I had not printed before and it was exciting to work on some new images. I have been shooting with a Canon 5D Mark II for about a year. I had waited to make the transition to digital for my landscape photography until I felt the quality and resolution of the digital files was equal to those captured on film. The Canon 5D is getting pretty close. Two of the prints for the book are good examples of the way I am using this camera.

The first image is of the San Francisco Peaks north of Flagstaff. I shot this from Sunset Crater Volcano National Monument as the sun was rising. It was a beautiful summer morning on the Colorado Plateau and I thought this telephoto shot captured the clouds hovering over the peaks nicely. 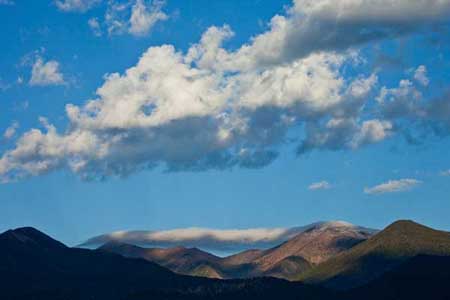 I also wanted to show the wider context of this scene so I mounted my camera on my Nodal Ninja panoramic tripod head and shot a series of seven overlapping frames. When merged in Photoshop, the result was this panoramic view.

The print of this photo for the book is a good example of adjusting the shadows and highlights to reveal detail that would otherwise be lost. The print clearly shows the texture of the volcanic rock in the foreground and even the tiny bright red penstemon flowers. 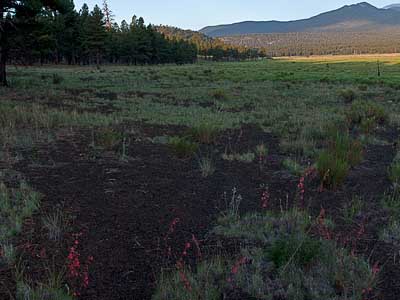 Making these prints reminded me why I love photography and has got me excited about our upcoming road trip. I’m looking forward to revisiting the places I love along US Route 89 and to discovering new places to photograph.