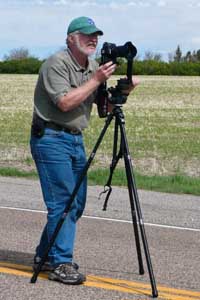 I have been making panoramic photographs for about 25 years. Until recently, I shot panoramas with a special camera that exposed a piece of film that is 2.25 inches by 6.75 inches and an angle of view of about 90 degrees. I love that format and the richness of detail that is capture on the large piece of film.

Now that I’ve made the switch to digital capture, I am taking a different approach to the panoramic image. Instead of a single exposure, I’m making a series of overlapping exposures and merging them together. This method gives me the freedom to determine how wide a view I make. I can also choose whether to shoot with a wide angle lens or to zoom in closer.

To maximize the effectiveness of the multiple exposure method of making panoramic photographs, it is important to keep the camera level and to rotate around the center of the lens. That is where the Nodal Ninja tripod head comes in. The Nodal Ninja positions the camera precisely and allows me to shoot quickly.

During the spring 2010 road trip, I kept the Nodal Ninja assembled next to my camera bag in the back of the car. That way I could set it up quickly when the scene was right for a panorama. Also, it is light weight enough that I could stash it my camera bag on hikes. Here are some examples of what is possible with multiple exposure panoramics.

The Virgin River at the entrance to the Narrows, Zion National Park

US Route 89 in the Great Plains of Montana