Off to a Good (if slightly late) Start

We finally took off yesterday at 5pm after many fits and starts, small catastrophes and a number of distractions. Since we were only driving from Oracle to Nogales, the later than anticipated start wasn’t a problem. Just hard on the nerves.

We camped (pulled in in the dark) at Pena Blanca Lake. Possibly the worst porta-potty situation I’ve ever seen. Well, no, there was that other time….

Anyway, this morning we drove to Nogales.

Here’s Jim heading to the border for an official start to the big journey.

I stayed in the car while he proceeded down the street. While waiting (because we didn’t put money in the parking meter and didn’t want a ticket), I took a couple of snapshots through the car windshield. I think these are cropped to omit the dead bugs on the windshield. 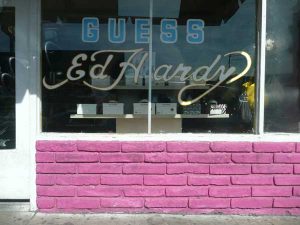 From here we proceeded north. Well, I guess it was the only way to go at this point. We made a number of stops along the way. The shot below was taken in Tumacacori at the Santa Cruz Chili and Spice Company. A great place! While there, I just had to take a shot of the sign that says, Watch Out Falling Palm Fronds. 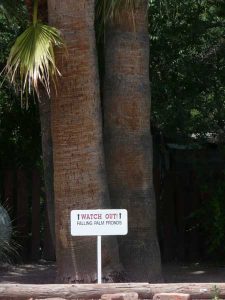 More tomorrow, as we continue north.