I think of Sunday as my day to laze about the house, so it was with some reluctance that I allowed Jim to talk me into making the one hour drive to the Casa Grande Ruins for the 2011 American Indian Music Fest. The promise of Cheetos and a diet Coke on the drive back was what got me off the couch.

Off we went. This is another lesson in the value of mustering up the energy to try something new. The one hour drive from Oracle is beautiful. You can look at some of the spectacular wild flowers Jim shot last summer along the Pinal Pioneer Highway (historic US Route 89). At this time of the year, there is less overt color, but it’s still a wonderful stretch of mostly undisturbed desert. From Tucson, it’s a 68 mile drive north and from Phoenix, it’s a 56 mile drive south to the Casa Grande Ruins National Monument.

Full disclosure: I’d never been to Casa Grande Ruins before. It can be seen from the road, looming off in the distance, but somehow in my 32 years in Arizona, I’d never taken the time to go there.

Since the parking lot at the monument was being used by Native American artists and crafts people to display and sell their work, a shuttle system had been set up by the town of Coolidge to transport visitors to the Park. It was great. The shuttles arrived every 5 minutes, so virtually no waiting was involved. 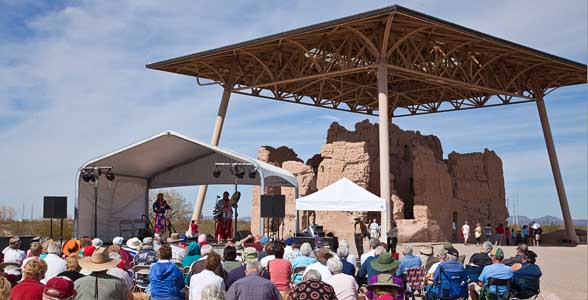 When we arrived at the Park, we could hear the music, so we made our way directly to the stage, which was set up adjacent to the ruin. It was an amazing experience to hear the music and see the dancers with the majestic and mysterious ruins as a backdrop. 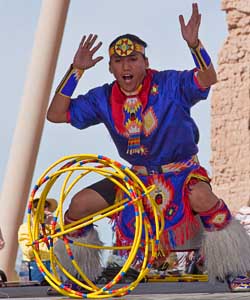 We were lucky enough to catch the performance by  Estan-Bah–Tony Duncan, Darrin Yazzi, and Jeremy Dancing Bull. I was so taken with Tony Duncan’s flute music that I just had to buy one of his albums. He’s a champion hoop dancer as well, and it was amazing to watch him work his magic, dancing while creating patterns with over a dozen hoops. While he made it look as easy as pie, this is a skill his father began to teach him starting when he was five years old.

The clear air, deep blue sky with the occasional crows flying overhead, the haunting sound of flute, the crowd of people enjoying a unique experience connecting prehistoric and modern Native American cultures together, made this foray into the unknown something I won’t ever forget. And the Cheetos and diet Coke were a great way to end the adventure.