From Mars Colony to Earth Lab-Biosphere2 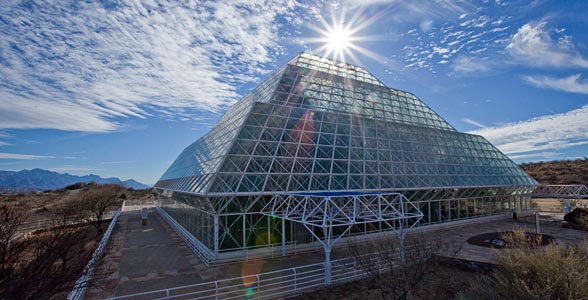 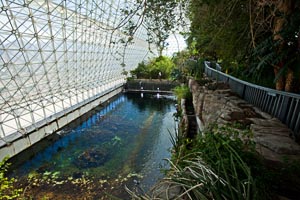 When Biosphere 2 was completed in 1991, it’s purpose was to simulate conditions in a completely sealed environment such as would be necessary for colonizing Mars. The intention was for crews of Biospherians to live in the glass roofed buildings for two years at a time. They were to be completely self-sustaining without any intervention from the outside. They grew all of their own food and recycled air and water. Unfortunately, shortly after the buildings were sealed, the carbon dioxide levels began to rise and eventually reached dangerous levels. It finally became necessary to pump in oxygen and the grand experiment became a media circus.

In addition to the struggle the Biospherians had with their environment, they also experienced not totally unexpected psychological stresses. Imagine yourself being confined to 3 acres of land with seven other people and being under constant observation for two years. When they finally emerged they did so in two groups of four that weren’t speaking to each other. The producers of the first reality TV show, Big Brother, have admitted that this was the basis for their show.

By 1994 the grand experiment seemed doomed. 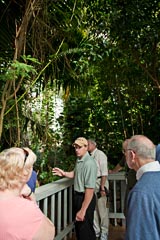 But then Ed Bass, the Texas billionaire who provided the funding for the construction of the Biosphere, stepped back in. Eventually, a deal was struck with Columbia University and the mission of the Biosphere shifted from building a Mars colony to a large-scale Earth laboratory. The facility proved to be perfect for modeling various ecosystems. The main structure contains three distinct biomes—a rain forest, an ocean and savanna, and a desert. Teams of scientists have carried out experiments that mimic the effects of increases in carbon dioxide that have contributed to the understanding of these processes in the larger world of Biosphere 1.

The management of the giant greenhouse in the foothills of the Santa Catalina Mountains north of Tucson, Arizona, has now passed to the University of Arizona. The new emphasis is on understanding water circulation—how it is absorbed, used by plants and evaporates. To do this the building that once house the farm is being converted to contain three giant hillsides where data about water, soil and plants can be collected under very controlled conditions. The project, called the Landscape Evolution Observatory, has been four years in the planning and is expected to be operational by the end of 2011.

The University of Arizona has also made a commitment to using the facility for science education through a program of public lectures, hands-on science experiences and teacher training. Every summer, science teachers from Arizona schools are invited to spend three weeks at the Biosphere to develop teaching tools in the earth sciences which they can take back to their classrooms. 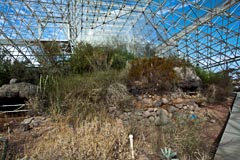 Public guided tours are conducted from 9 am to 4 pm every day of the year except Thanksgiving and Christmas Day. The tour takes visitors through all of the biomes and is led by knowledgable guides. You may even encounter a scientist at work who will be happy to explain the nature of his research.

Biosphere 2 is located six miles east of historic US Route 89, now Oracle Road, on Arizona Route 77. For complete information on visiting Biosphere 2 and a schedule of upcoming events, go to the Biosphere 2 website. For more background, read this article in Discover magazine: Life Under the Bubble.