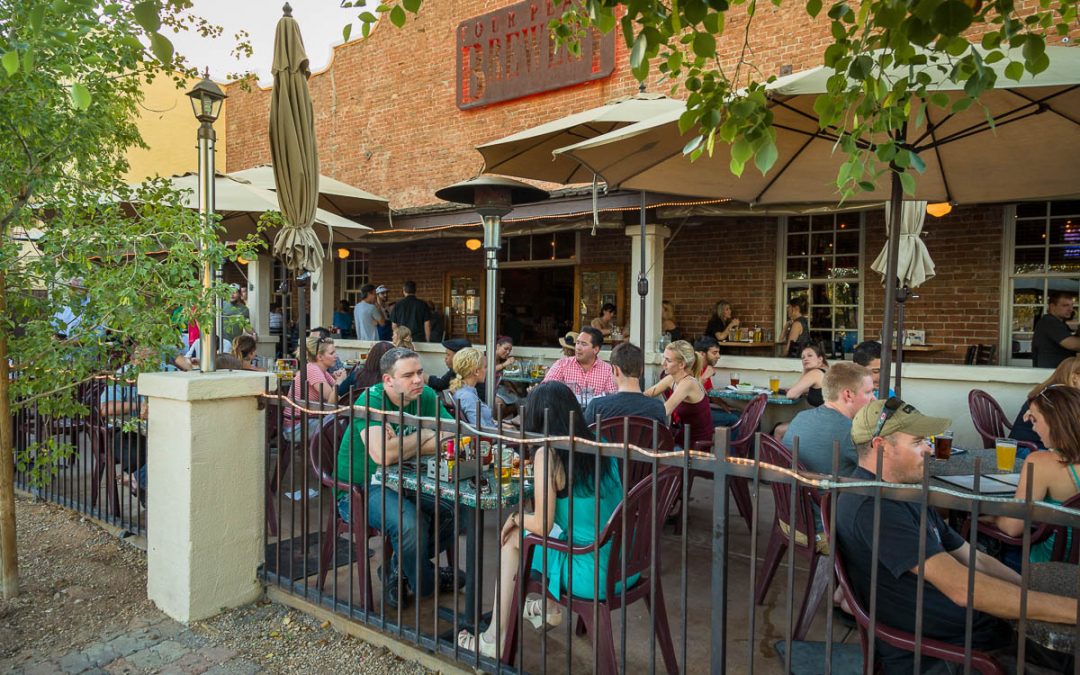 As soon as we turned onto Old 8th Street in Tempe, Arizona, it was apparent that we had arrived at someplace special. The street was lined with cars on both sides and it was only 4:30 in the afternoon. I drove past the building, made a quick u-turn and grabbed the last space on the block. We had come to Four Peaks Brewery to take a tour, sample the brews and have a bite to eat.

When I walked inside, the first thing that struck me was the high ceiling and light pouring through clerestories illuminating rows of stainless steel fermentation tanks. Obviously, this placed was geared for the production of many kegs and bottles of beer. The building was started in 1892 as an ice factory but spent most of its life as a processing plant for dairy products. Ice to milk to beer—there is something poetic about that, at least for those of us who love good beer. 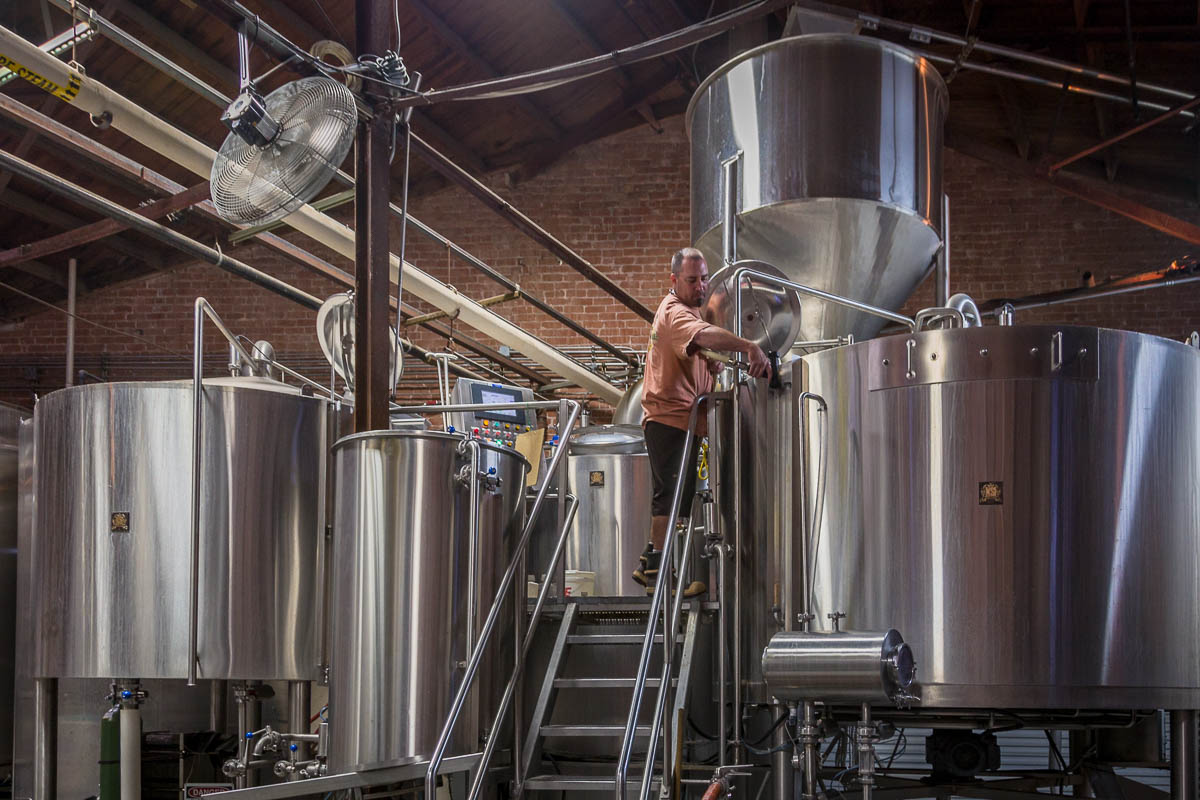 Four Peaks Brewery began twelve years ago and has been expanding steadily ever since to become one of the largest craft brewers in Arizona. They currently produce about 5,000 cases a month divided among the regular line-up of eight beers. The front quarter of the building is a restaurant and bar. The rest of the building is devoted to brewing and a malty, yeasty smell permeates the air.

We got to go behind the scenes to watch as one of the brewers transferring the nascent beer from the mash tun into the brew kettle and then adding the bittering hops. I had been through the process in my home brewery but this was on a whole other scale. We also saw a line-up of whiskey barrels that were being used to created a special barrel-aged version of one of Four Peaks ales.

One unique part of Four Peaks brewing process is the way they handle the water. Beers from around the world get their distinctive taste from the local water. In order to recreate the authentic properties of various beers, Four Peaks begins by purifying all of their water by reverse osmosis. The brewer then adds the correct minerals as determined by the water source of the beer they are emulating. For example, KiltLifter is a Scottish-style ale, so the water used in the brew is based on Edinburgh well water.

After the tour we sat down to have dinner and sample the eight beers that are always on tap. Don’t worry; the samples were in small glasses so I wound up drinking about the equivalent of a glass and a half. I tried six of the eight and Barb checked out the other two. Here are the brief tasting notes I took at the time.

Hop Knot Ale: a American pale ale with the hoppy aroma of an IPA. The four different hops are dominated by a piney aroma and taste. The mouthfeel is smooth with just the right amount of bitterness in the finish.

Raj India Pale Ale: this English-style pale ale is orange in color with good balance of malt and hops.

Sunbru: a German Kolsch-style beer that is a cross between an ale and a lager. It is bright, crisp and dry making it a great summer thirst quencher.

KiltLifter: the best known and most widely distributed of Four Peaks beer, this Scottish-style ale is dark amber and full of caramel and roasted barley flavors. The malt tends to dominate over the hops with an almost Scotch whiskey note of smoke and earth. There is something mysterious about KiltLifter that keeps me coming back for more.

Oatmeal Stout: as it comes from the tap, it is carbonated with a combination of nitrogen and CO2 which creates a creamy, tight head. It goes down smooth with just the right amount of oatmeal flavor.

Hefe-Weizen: this is Barbara’s favorite beer and Four Peaks’ version is low on bitterness allowing the clove and banana flavor of the Bavarian yeast to come through the malty wheat.

On occasion, Four Peaks will tap one of their barrel-aged beers or some other special brew. You have to be there for a taste so check the Facebook page for announcements. Also, the brewery’s blog has a lot of good information on how and why Four Peaks brews the way they do.