Borderlands Brewing Company on Historic US Route 89 in Tucson, Arizona

Borderlans Brewing is located in a historic warehouse in downtown Tucson

I hear the train before I see it through the window behind the bar at Borderlands Brewing Company. It is a reminder that Tucson’s newest brewery is located in an old warehouse near downtown. The red-brick building was built in the early 1900s originally used by the Toole and Sons Produce Company. The exposed brick walls and roof trusses give the brewery an industrial feeling which is warmed by the original art on the walls and the long wooden bar.

Borderlands is the dream come true of two long-time homebrew buddies, Mike Mallozzi and Myles Stone. Mike is a microbiologist doing research at U of A and Myles is a medical student. Shortly after starting the brewery, they met Blake Collins who is well-know in the Tucson homebrew community and has a wealth of professional beer brewing experience. He acted as an advisor doing the start-up period and is now the brewmaster. 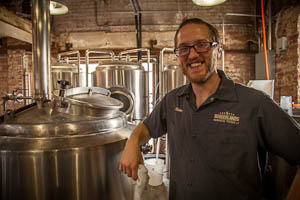 Borderlands Brewing is licensed as a production brewery. Consequently they are open for limited hours to offer the public an opportunity to sample their brews. Currently, you can join the crowds on Wednesday and Friday from 4 to 7 pm and on the second Saturday of the month from 12 to 4 pm. According to Borderlands’ Facebook page, they are planning to add a few more hours. There is always music provided by local bands and there is often a food truck or two parked outside to satisfy your cravings.

While the Borderlands Brewing Company website lists six beers, they are not all available all the time. When I visited, there were three on tap which I was pleased to sample.

First up is Ol’ Loco, Ol’ Frontier Citrus IPA. It pours with a clean white head that leaves behind a lacy pattern on the glass. A rich gold color, it hit my nose with a floral aroma. A bready not too sweet malt flovor is accented by the mild citrus flavor of the hops. It finishes with a mild well-balanced bitterness that left me wanting to keep on sipping. At 7% ABV and an IBU of 56, Ol’ Loco will satisfy all IPA lovers.

I next sampled Noche Dulce, Moonlight Vanilla Porter, which is about as far away from Ol’ Loco as you can get and still be drinking beer. Noche Dulce is black as the ace of spades and pours with a rich tan head. Contrary to popular belief that dark beers are heavy and bitter, Noche Dulce is smooth as silk with a the strong flavor of vanilla. At first, it seems almost too sweet but that impression is quickly offset by a spicy note that I can’t quite identify—cinnamon perhaps. This porter would be perfect for sipping with dessert.

Finally, I sampled Santa Rita, A Refreshing Amber Ale, which completed the spectrum between the IPA and the porter. As the name implies, Santa Rita is amber in color with a fine white head. The aroma reminded me of apples and berries. The taste was different than any beer I had experienced which I learned was due to the generous amount of rye in the malt. The rye contributes a bready, sour-dough, flavor that I could easily get used to. Santa Rita is lower in alcohol at 5.5% and would make an excellent session beer.

Borderlands Brewing Company is supplying their beers in kegs to several local restaurants. The list keeps changing so check the website to see where you can find them around Tucson. Mike and Myles have plans to add additional capacity to there current six barrel fermentors so they can step up production and make their brews more widely available. In the meantime, you can pick up a growler of your favorite Borderlands brew to take home.

For a brewery that has only been open for a few months, Borderlands shows great promise. I’m looking forward to summer when they will be serving up their Prickly Pear Wheat and maybe a surprise or two. 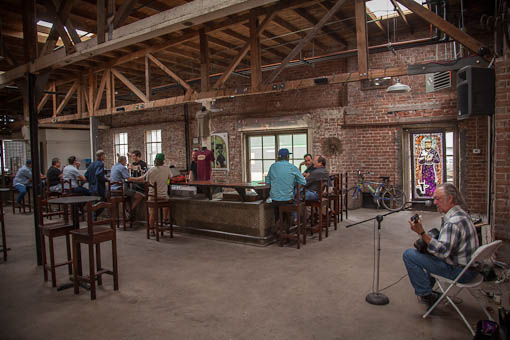