Biosphere2: A Phenomenon Just Down the Street, Where Science and Creativity Meet 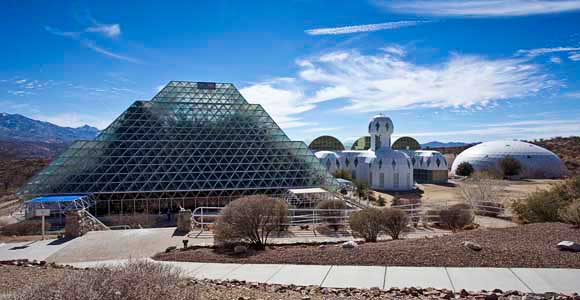 Last week, we were treated to a tour of the Biosphere 2. Considering that we have been living about ten minutes away for nearly two years, I’d say that it’s about time. We can see the Biosphere in the distance when we take walks down our own street. It looks massive, intriguing and oh, so close. And yet it took having out-of-town family visiting to prompt us to finally make the visit. Thanks, Jack and Katie!

We had a fabulous tour. It’s difficult to describe just how large each of the domes is. You’ll just have to go there to see. The whole experience was otherworldly, with these huge buildings nestled just below the Catalina Mountains. I felt like I was in a Jetsons TV show. It is clearly the world of science. And science generally scares me. However, what goes on at the Biosphere was made understandable and interesting even to me by our scientist/tour guides.

Jim’s next blog post will have the nitty gritty details about the why’s and where for’s of the place. Read it and you’ll get a feel for the historical background and descriptions of some of the scientific experimentation that is going on there. I however, was most interested in the way the place feels and looks. There’s some pretty interesting gossip about the group of people who lived there for two years, too. In fact there’s some speculation that the idea for the first reality TV show was a result of the happenings at the Biosphere.

Within one of the huge glass-roofed buildings is a rainforest, an ocean and a desert. A walkway passes through each zone. Water literally drips from the trees in the rain forest. Huge bamboo and all kinds of large leaf vines and strange plants filled this area. It felt a bit like being in a Rousseau painting. It made me want to create my own paintings of the scene.

Moving along, the air dried out somewhat as we entered the ocean area. At one point coral thrived in this “ocean”. Changes in CO2 and other environmental issues caused the death of the coral but it was still impressive to see such a large body of water under a dome in the desert.

In to the desert, I felt right at home. The air was dry and crystal clear. The plants were familiar. The changing humidity in the air really affected the light and appearance of the surroundings. I think this was especially evident because you could traverse from one atmosphere to the next in a few minutes.

For me the most interesting part of the experience was witnessing the way in which these vast spaces are being repurposed. Initially designed to hold a group of people who were to experiment with living in a self-contained structure for several years, the scientists currently involved are looking at ways to use the space to make sense of what is happening to our planet today. It is large enough to create giant controlled experiments. One huge area is being reconfigured into vast series of cinder hills, in order to learn how water percolates through the ground and what happens as it does this. It’s taken four years to put the experiment together. Seeing the work going into this makes it clear how much it takes to reproduce and try to measure what happens all by itself every day all around us. The number of variables to contend with is astounding. There must be constant decision making going on. Just choosing to focus on a particular question and see it through must take a level of cooperation incomprehensible to a head strong artist like me.

Probably my favorite part of the visit (aside from the great picnic lunch) was the building with the giant “lung”. I’m a bit confused about how the lung would have worked but it’s purpose was to balance the pressure within the Biosphere buildings back in the day when they were completely sealed off from outside air. In this low (relatively speaking) dome shaped structure hung this thing from the ceiling. It looked a bit like a giant sea creature. The best part of all were the echoes created in this space. Our guides took great pleasure in making lots of interesting sounds for us. Apparently, musicians have played in the space. I would love to hear how music is transformed in that giant echo chamber.