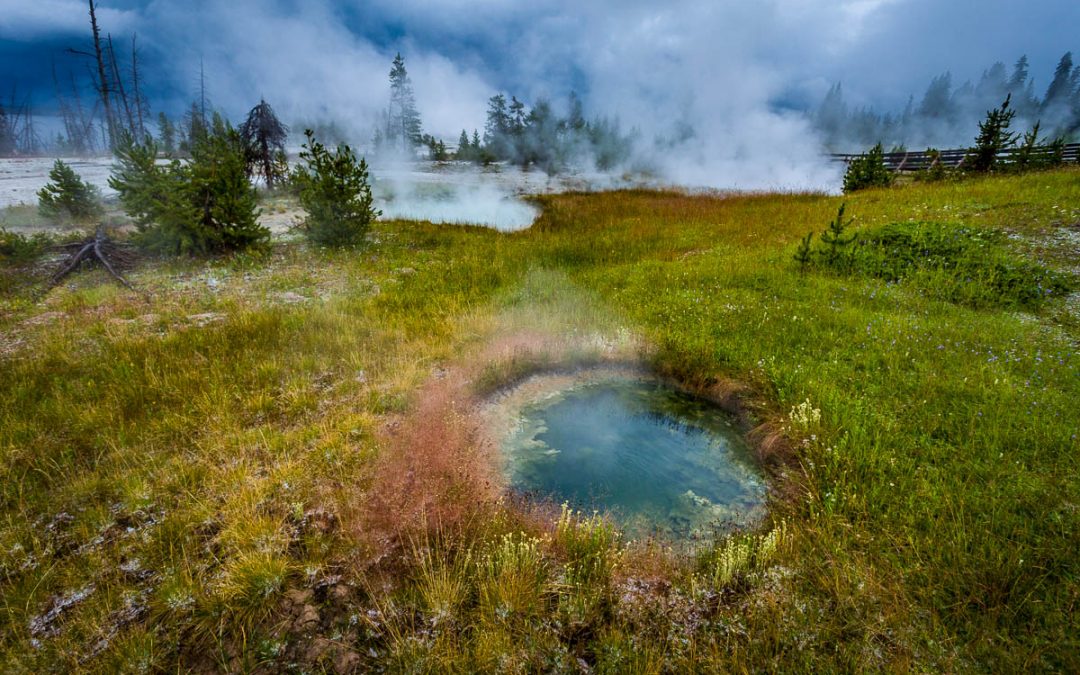 Anyone who has visited Yellowstone National Park knows that volcanism is the primary shaper of the landscape there. Volcanic processes drive the numerous geysers and mud pots, are responsible for much of the earthquake activity, and have created many of the rocks observed in the central part of the park. No one visits Yellowstone without coming into contact with the science of volcanology and the larger science of geology.

For many years the best explanation for the cause of Yellowstone’s volcanism was that the earth’s surface here was being punctured by a cylindrical plume of hot material rising from the depths in the earth’s mantle. This so called “hot spot” is envisioned as being fixed within the earth’s interior as the North American crust drifts over it to the west and southwest. Indeed, a linear trail of volcanism can be traced southwest of Yellowstone to the Idaho/Nevada state line. The story goes that as the continent moved over the hot spot, it was punctured by numerous volcanic eruptions and today the hot spot resides directly beneath Yellowstone. (The same scenario explains the origin of the Hawaiian Island chain in the Pacific Ocean). The model is elegant and easily understood by most visitors. 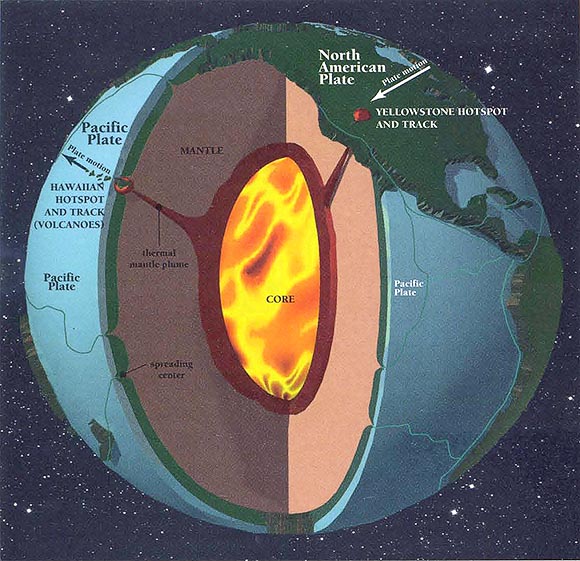 Cutaway view of the earth showing the origin of hot spots beneath Yellowstone and Hawaii. Newer research in Yellowstone suggests a more complicated origin to the volcanism there.

But hot spot theory may be too simple of an explanation in some instances. For example, geologists know that the mantle is subject to dynamic movements within it and it is hard to reconcile how a plume of heat can remain stationary in such a turbulent environment (note that the mantle moves or convects at about the rate your fingernails grow, about 2 inches per year, so it is not as rapidly turbulent as the earth’s atmosphere). It is also suspected that a remnant of the Pacific Ocean seafloor resides beneath Yellowstone and some researchers wonder how a plume of heat could puncture it.

New research suggests that maybe the hot spot beneath Yellowstone originated when hot mantle material escaped from under the ocean slab by flowing up and around its easternmost edge. This ocean remnant is being pushed to the east under North America and this could explain the migration of volcanism from Nevada to Yellowstone during the last 16 million years.

Most visitors to Yellowstone are aware of recent documentaries that instill fear that a huge volcanic episode is imminent in this region. Geologic studies suggest that violent eruptions will occur here in the future but scientists are constantly monitoring the activity beneath Yellowstone Lake. While true that the crust beneath the lake swells and sinks as magma below shifts and swirls, the chances of an explosive eruption are slim in the near future. The last three huge eruptions occurred 2.1, 1.2, and 0.64 million years ago. Using these three data points alone suggests that the recurrence interval, that is the average amount of time between eruptions, is about 750,000 years. It has been about 640,000 years since the last big eruption. We are likely safe from a big blast in the foreseeable future, although at some point in the next few 10’s to 100’s of thousands of years, it will occur.

About the Author
Wayne Ranney is a geologist, trail guide, and author based in Flagstaff, Arizona. He completed his Master’s degree in geology at Northern Arizona University by compiling a geologic map of the House Mountain volcano near Sedona. Out of this project came his first book, “Sedona Through Time”, now in its 3rd edition and considered the foremost book on the subject. A few of his other books include “Carving Grand Canyon” and “Ancient Landscapes of the Colorado Plateau”. Wayne also works as an international guide and geologic interpreter with trips to all seven continents and over 80 countries including Antarctica, Africa, the Amazon, Patagonia, and the North and South Poles. Learn more about his writing, outdoor adventures, and lectures at www.wayneranney.com or his blog Earthly Musings.